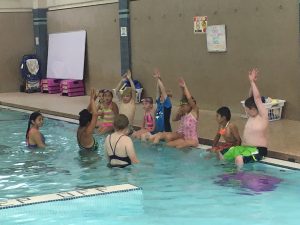 Ashton and Emma had their first day of summer school swim lessons today. They missed Monday and Tuesday because Ashton and I were in Iowa for his medical appointments. The photo is not the best small, hard to see Emma, she is on the far left and Ashton is on the far right. It is kind of cool that they are both starting in the same level though it will be hard on Ashton if Emma moves up and he does not.

The purple in the water is a step aerobics step the instructors put there so that Ashton is tall enough to be able to sit on the side since he can not boost himself up with his arms. He may not have strength in his arms for lifting and carrying things but it is good to see that he can still raise his arms so straight above his head.

This pool has nice stairs! It has a more graduated incline and lower riser height then the pools we encounter at hotels. Ashton is able to get out of the pool himself instead of with me standing behind him and lifting him up each step.

After the session the Health Aide and Instructors commented on how well he did with lessons today. Ashton’s reply was “That’s because I’m light in water but heavy on land.” Kind of sad but oh so true.