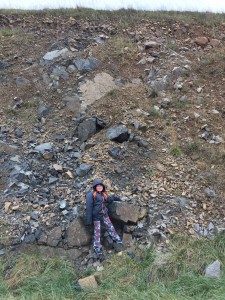 One of my favorite spots around here is Cut Rock Road. Since it was an early release day Ashton did not have to get back to school after his 6 month check up with his Pediatrician so we stopped for a little adventure and he was willing to take a look up close.

It was not too difficult getting him up there and wedged in a rock for a photo but getting back was a completely different story. It was very difficult getting him up the ditch as in he was on the ground like he was paralyzed. His new windbreaker jacket was very handy for me to have something to grab onto and pull him up on his feet and hold him there so he could then focus on raising his torso. He was then able to walk to the van but I had to push him in and shut door so he didn’t fall out. Then I got in from the other side to pull him up and into his seat. 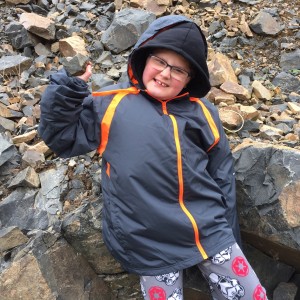 and that is key in keeping his lungs and heart functioning as long as possible. But when Ashton gets stuck or can’t get up he literally is a lifeless 100 pound rag doll except he keeps saying “get me up” until he is up.

Ashton and I did have fun though. And we are both happy we made the stop. When Ashton was finally getting diagnosed at 4 years old he was having weekly medical appointments. Most of the facilities we went to used rock instead of mulch for their landscaping. That is when Ashton became very interested in rocks. He would look for a special rock either coming in or going out from each appointment. The rocks in these photos are way cooler than landscape rock! The rock he is holding is about the size of a baseball. It may look like a smile but that is a grimace on Ashton’s face. It was not easy for him to hold the rock up and he wanted me to hurry and take a picture so he could let it drop.

Ashton has a very short window of opportunity to get to places that a big power wheelchair can’t get to. He has always been a determined boy and he tries very hard to do ordinary everyday things. And while most parents are busy capturing their child’s first milestones I am always wondering if this is his last time being able to do something and am trying to capture his final milestone moments. [DJW-11/13/2015]