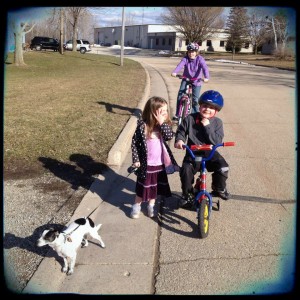 The happy and content smile on Ashton’s face in this photo is so precious to me. It was taken on one of the nice days we had in April 2013. He tried so hard just to ride a bike with training wheels on a flat cement surface. He was first able to the previous spring at almost 6 years old after he started taking corticosteroids to try and slow his progressive muscle wasting. This photo was his first real bike ride at almost 7 years old. We lived on a short dead end street. He went to the end and back to our driveway but wanted to keep going. He made it to the corner but was too tired to make it back from there. Yes, he was getting too tall for his bike so we got him a bigger one which he seemed to pedal better. He was so excited for his first family bike ride to the park around the corner that we normally drove him to. He rode there, played a bit and rode back all by himself just very, very slowly. The next day as I drove Ashton home from school I saw a boy his age riding bike home just a peddling away like he was on his way to put out a fire. Seeing that hit so hard! Yes, Ashton had finally mastered riding a bike but he was not even close to keeping up with his peers. Ashton was not able to advance to riding a bike without training wheels either because of not being able to peddle fast enough to keep going without tipping over and poor balance. Sydney rode her bike one mile to school when we lived in town and Ashton wanted to join her so badly. Ashton only had short period of time that he was able to ride his bike. Since moving riding an adaptive tricycle inside has been part of his Physical Therapy time at school.